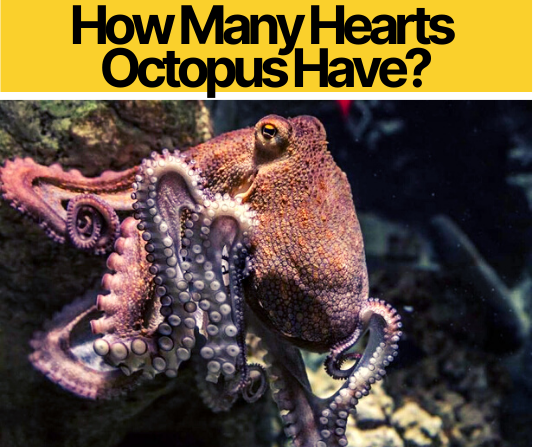 All animals – from the smallest insect to giant blue whales can inspire awe, but octopuses are a class of their own. They have always fascinated people and even spawned myths. Have you heard about the nine brains that octopuses supposedly have? You have, right?

Well, that’s just one of the many amazing and popular “facts” about the octopus. It’s not true though, but the next wonder – the multiple hearts of the octopus, is a “fact”.

Why do Octopuses have Three Hearts?

Octopuses have three hearts that work simultaneously to keep the octopus alive. That’s amazing, right? But why do they have three hearts, and do they really need all three – we humans, seem to do well enough with one heart?

Unlike humans and mammals that need only one heart, octopuses have three hearts because the copper-rich hemocyanin in their blood makes the blood thicker, this means that they need more pressure (and therefore more hearts) to pump the blood to and from their gills and around their body.

Does an octopus need all three hearts to survive?

All three of the octopus’ heart are very important. Each heart of the octopus is not like a substitute or reserve heart. The three hearts actually work at the same time to pump blood through each the gills and around the body.

Regardless of this, the octopus does not need all three hearts to survive. It can live with less than all three of its hearts.

Can an Octopus Live with Two Hearts?

The answer depends on one which of the three hearts is not working. If one of these “branchial” hearts stops working, the octopus will still survive with two hearts. Some people don’t think so however, they believe that since an octopus needs two hearts to pump blood through the gills, then if one fails, the octopus will not get enough oxygen-carrying blood and will eventually die.

It’s not necessarily true. Remember, the octopus has one heart near each of its two gills that pump blood through the gills. The two gills are like human lungs, and when blood passes through them, the blood absorbs oxygen from the gills. Even humans can survive on one lung. Add to this the fact that an octopus also absorbs oxygen through its thin skin. In fact, when resting, octopus get about 41% of their oxygen from their skin!

An octopus with two hearts may be a lot less active than normal, but it will survive. That said, if the octopus loses its systemic heart, which pumps blood around the body, it is as good as dead.

Can an Octopus Live with One Heart?

That is very doubtful. Losing two out of its three hearts means it has either lost both branchial hearts or one branchial heart and its main (systemic) heart. Losing both branchial hearts means the octopus cannot get blood through the gills to be oxygenated. Losing one plus the main heart means the octopus may be able to pump blood through one heart and get it oxygenated, but then it wouldn’t be able to pump any blood to the rest of the body.  An octopus would die if it lost two hearts, it cannot live with just one heart.

Purpose, Description & Size of each Heart in the Octopus

Let’s take a closer look at each of the hearts, what they do, and everything else we can learn about them.

1. The Two Branchial Hearts of the Octopus

An octopus has two hearts that are located right next to the two gills that it uses for respiration. The hearts are called branchial because they contract to pump blood up through the gills of the octopus. They are also called “gill hearts”. An octopus needs these “accessory hearts” because unlike humans who’s heart have two sides that pump oxygen-rich blood to the lungs and then pump the now oxygen-rich blood throughout our bodies, the main heart of an octopus can only pump blood throughout the body. So, it needs “extra” hearts to pump blood through the gills for it.

How big are these “gill hearts”? There are about 300 species of octopuses all over the world. Some are so small you can hold them on your palm, like the Atlantic pygmy octopus. While others, like the giant Pacific octopus, can grow to about 16 feet. Because of this, the size of their hearts, are different for each type of octopus.

2. The Systemic Heart of the Octopus

Can Some Octopuses Have More Than Three Hearts?

No, octopuses just have 3 hearts. Each heart carries out a specific function. (The gill hearts pump blood through the gills, while the systemic heart drives the blood throughout the rest of the body). So, any additional heart would be unnecessary.

Can Octopuses Have Eight Hearts?

Three hearts are a lot already. I’m not sure where an additional five hearts would fit in since an octopus has only enough room for just three hearts. So, no, an octopus cannot have eight hearts.

Even though octopuses are very fascinating and more scientists are carrying out more research on them, there is still a lot we do not know about octopuses. But we do know a little about them. Here are some interesting things we found out.

Because an octopus has three hearts does not mean it loves three-times as much. They are quite solitary and when they do meet (almost at the end of their lifespan) to mate, it is often deadly for the male partner. The female may eat the male right after mating or the males develop “dementia” abandon their normal caution and die soon after.

Do Octopus Have Blood and What Color is their Blood?

Yes, octopuses have blood. So do other mollusks like snails, squids, cuttlefish, nautilus, and many others. The blood of an octopus is blue. Many invertebrates also have blue blood – and no, they’re not aliens 😉

Does an Octopus Bleed?

Short answer, yes! Since they have blue blood, if you were to cut an octopus or see an injured octopus, don’t be surprised if you see blue blood.

Why do Octopuses Have Blue Blood?

Octopuses have blue blood because the oxygen carrier in their bloodstream is hemocyanin. Hemocyanin is a copper-ion protein that carries oxygen around the bodies of invertebrate animals like the octopus. Unlike hemoglobin in humans, hemocyanin dissolves directly into the bloodstream of the octopus and this makes the blood blue.

What Other Creatures & Animals Has Three Hearts?

Octopuses are not the only creatures with three hearts. Their closest relatives, squids, and cuttlefish also have three hearts. There are other animals that have even more hearts! The hagfish tops the list with four hearts and between five to fifteen pairs of gills. The earthworm is sometimes listed as a multi-heart animal even though, the aortic arches of the earthworm are not technically hearts.

I’ve included answers to a few of the popular questions you might have heard about octopuses, check them out.

How Many Brains Does an Octopus Have?

Contrary to popular opinion, Octopuses only have one large brain. But they also have about two-thirds of their neurons distributed in their arms, people sometimes get confused and refer to the neuron bundles as “brain”. That’s why you tend to see articles like this one claiming that octopuses have nine brains.

The bundles of neurons are highly specialized, however, and independently control the movement of each arm, taste, and feel objects freeing up the main brain to focus on other activities.

How Many Stomachs Does an Octopus Have?

Octopuses have only one stomach. Despite their having multiple everything – or almost everything, these intelligent cephalopods do not seem to want an extra stomach.

How Many Tentacles Does an Octopus Have?

An octopus does not have any tentacle. It only has eight arms. People who are similarly confused by the squid also claim it has ten tentacles. A squid has eight arms and two tentacles. What’s the difference?

There are two main ways to tell the difference between tentacles and arms. The first is that tentacles can be retracted, while arms remain at the same length even though they can be folded. The second way of telling the difference is that arms have suckers along their whole length, while tentacles only have suckers at the tips.

There you have it, everything about the amazing and weird octopus and there’s still a lot more we don’t even know. Even at that, scientists are already studying some of the bizarre characteristics of octopuses to see how or if we can adapt their techniques to build everything from robots to 3D mimicking artificial skins.