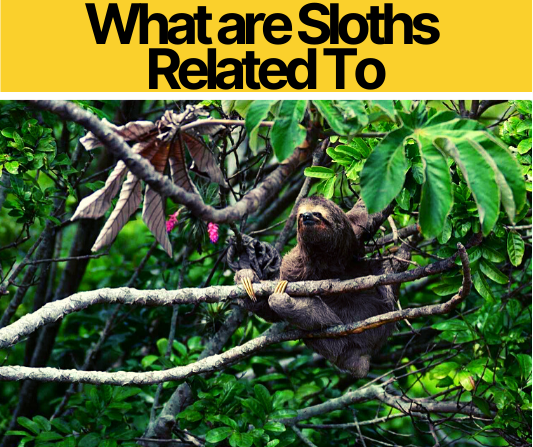 We know sloths as the world’s slowest animal, but that is not the only unusual thing about them. Science has recently addressed a few fascinating questions about sloths, such as how long they can hold their breath, and the dangers they have to undertake just to poop. Besides these surprising topics, this article will explore a fundamental mystery: What exactly are sloths and What are Sloths Related to

These funny creatures look like a strange cross between bears and monkeys. Read on to learn about their similarities with other animals, including the connection between sloths and anteaters.

What family is a sloth part of?

Sloths are very unique-looking animals. In fact, scientists have found that they are not as easy to classify as many other animals are. For example, while we can see that dogs and coyotes have many shared characteristics, we cannot easily find animals that share similarities with sloths. Looking at them, would you ever guess that they are most closely grouped with anteaters? To understand family classification, it helps to know the system that is used to categorize animals. Every animal species is grouped on different levels according to certain features they have in common.

What are Sloths Related to? Are anteaters and sloths related?

Anteaters and sloths have many similarities ,they share similar classification and they are both related. They are both classed as members of the animal kingdom (kingdom: Animalia), and then as vertebrates (phylum: Chordata). Next, they classify as mammals (class: Mammalia). They are then placed in a subcategory of certain mammals found in the Americas (superorder: Xenarthra).

Interestingly, this group also contains armadillos. Sloths, anteaters, and armadillos are unusual because they have one set of teeth that lasts all their lives, unlike many mammals that lose their baby teeth. Additionally, xenarthrans also have unusual joints in their spines, can only see one color, and have an extremely low metabolism.

Sloths and anteaters are separated from armadillos due to having hair (Order: Pilosa). Yet there are also many differences between sloths and anteaters. Anteaters are carnivorous, as they eat insects, and they also live on the ground. Meanwhile sloths are mainly herbivorous, with occasional meals of insects and small lizards. Sloths hardly ever come down from the tree-tops, and they are not accustomed to travelling far on the ground.

What Other Animals Sloths could be related to, What do sloths have in common with similar animals?

Sloths and anteaters look rather different. What about monkeys, beavers or bears? Let’s see what sloths have in common with other animals that we might associate them with.

Are monkeys and sloths related

Monkeys and sloths are not considered to be closely related. They are both hairy, have extraordinarily long arms, and love to swing through the trees. However, they are classed quite separately. They are both vertebrate mammals, but monkeys are primates while sloths are xenarthrans.

Are primates and sloths related

The order of primates includes gorillas, orangutans, and chimpanzees, as well as a host of monkey-like animals of different shapes and sizes. This group includes some strange little creatures such as lemurs and tarsiers. So, why are sloths not included as primates? Primates have certain unique characteristics that aren’t true for sloths. For one thing, primates have larger brains in relation to their body size.

Almost all primates have hands with five fingers, and most have opposable thumbs, which allow them to pick up and hold things easily. Sloths have very different hands from primates. Sloths’ non-opposable fingers taper into very long, curved claws that wrap around branches while hanging from trees. They have three claws on each hind limb and two or three on their forelimbs, depending on the type of sloth. Primates are generally built for very different forms of movement, including leaping between branches and walking upright or on all-fours. Sloths have strong arms, but they do not have the dexterity or agility for the movements that primates make.

Are beavers and sloths related

Beavers and sloths are not closely related. They may look somewhat similar with their small eyes and large noses in their cute, hairy faces. Although these are both vertebrate mammals, beavers are rodents. Rodents are a diverse group, including mice and squirrels, and the members are all distinguished by their large front teeth. Sloths, on the other hand, have quite small teeth that are flat and mostly used for grinding leaves. Rodents are fast-moving creatures with short limbs, unlike sloths.

Are bears and sloths related

Bears are not closely related to sloths. Sloths may seem like bears due to their small heads perched on long-limbed bodies, but ears diverge into the classification of carnivores, alongside wolves and lions. There are many varieties of carnivores, but it is important that they have strong teeth and jaws for tearing at flesh, and efficient digestive systems. Sloths can take up to a month to digest the food they eat, which is mostly made up of plants with occasional ants, birds’ eggs, and small lizards. Carnivores live in a competitive world that requires them to be fast, agile, and strong in order to catch or steal their food and defend each meal from rivals. Sloths have a very different anatomy and lifestyle.

Are badgers and sloths related

Badgers and sloths are not closely related as well. We might imagine badgers and anteaters to be quite similar, which would mean relation to sloths as well. However, badgers are actually closer to bears as they also belong to the order of carnivores. Several of the features that separate bears from sloths are also true for badgers.

Are koalas and sloths related

Sloths are not close relatives of koalas, although we may notice similarities between these slow and sleepy tree-dwellers. Koalas are also mammals, but they are separated into the order of marsupials. Marsupials include kangaroos and opossums. The skulls of marsupials are typically lighter and more proportionately elongated than those of sloths. Additionally, marsupials have pouches where they carry their young, which can feed on teats found inside the pouch. Sloths do not have pouches. Their young are carried by clinging to their mother’s fur with those long claws.

Are humans and sloths related

Humans are not related to sloths any more than apes are. This is because humans are also classified as primates for the size of our brains and the dexterity of our hands, which are similar to those of apes and monkeys.

Are bats and sloths related

Bats and sloths are also not close relatives. We can agree that both animals are mysterious and unique of appearance, they seem to enjoy hanging upside down, and (questionably) they have cute faces with their little eyes and flat snouts. Bats are a highly diverse type of mammal, listed in the order of Chiroptera. Like many other animals we have seen, they have very different teeth from those of sloths. Bats have lots of teeth, and many varieties of bat have large teeth for opening and crushing shells. Besides their powerful wings, bats have five very flexible fingers. Flying requires a lot of energy and high oxygen levels, so a bat’s digestive and circulatory systems are faster and more efficient than those of sloths.

Fossils from extinct giant sloth-type animals have been found across the Americas. These enormous beasts, including Megatherium, Megalonyx, and Nothroderiids, have many of the same characteristics as the much smaller sloths that exist today. They had similar teeth and skull-shape, as well as large claws that would have forced them to walk on the sides of their feet. Since only their bones of these animals remain, scientists have to make estimations as to their other characteristics. For example, these giant sloth-like creatures could not have climbed trees due to their enormous size and weight. Their bone structures are suitable for walking on four or two feet, giving them the name of ground sloths.