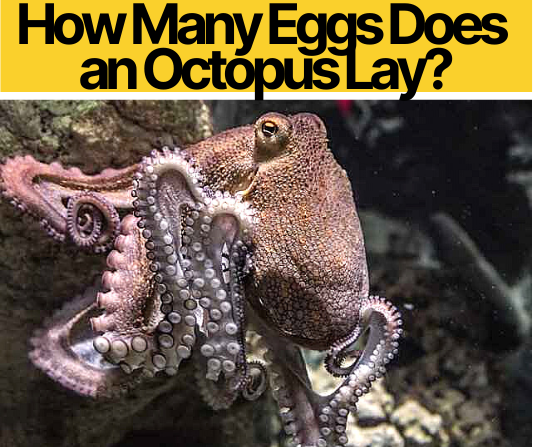 The Giant Pacific Octopus for example has 3 hearts, 9 brains, and blue blood. It sounds like something straight out of a fantasy novel, but alas our own world is magical enough to have creatures as big as 600 pounds capable of squeezing through a coin-sized hole.

When it comes to reproduction, octopuses once again intrigue us with their unusual, some might even say morbid, way of blessing the oceans with the next generation of octopus.

We’ll start with the basics.

How Many Eggs Does an Octopus Lay?

The amount of eggs a female octopus can produce and lay varies depending on the species. The Giant Pacific Octopus for example will lay between 20,000 to 100,000 eggs. Speaking generally however, octopuses can lay up to 200,000 eggs! These are some crazy numbers, but for the survival of the octopus’ species, this is necessary. Octopuses have a short life span of only a few years. They are also semelparous creatures. This means they reproduce once and die.

To put that into perspective: short life span, one shot at reproduction, and no chance of ensuring your babies survival. Their methods of reproduction may be saddening, but they are necessary. And once you fully understand the process, you can begin to fully appreciate the flow of nature, no matter the ambivalence you might feel.

Octopuses are considered the darlings of the ocean. Intelligent, freaky, and majestic, they are known for their puzzle solving expertise and have a reputation as highly skilled escape artists. Their massive and complex nervous system, ability to change color, shape, texture, and regrow missing limbs fascinates scientist and us common folk alike.

Do Octopus  even Lay Eggs

As we have learned, octopuses do, in fact, lay eggs in the thousands to ensure the survival of their species. Both male and female octopus die after reproduction. There are many reasons for this, a lot of which are still being discovered. Because octopuses have no other purpose in life than to reproduce, it seems that this is natures way of keeping the balance (and not having giant monster octopuses roaming our oceans). Female octopuses spend months caring for their eggs, keeping them away from predators and parasites, ensuring all of them have a shot in open water. During these months, the mama does not leave their side. She brushes against them, using the current to keep the eggs clean and remains defensive. This means that she does not eat, or move, and by the time her babies are ready to hatch, she is near starvation. She’ll have enough energy to blow them into the open water before wasting away.

What Are Octopus Eggs Called?

There is no specific term used when talking about octopuses’ eggs, however it is interesting to note that these eggs are teardrop shaped, milky, and braided together in bunches by the female.

What Is The Size Of Octopus Eggs?

Octopus egg sizes vary according to species. There are two informal groups of octopus, small egged and large egged.
The small egged octopuses have tiny eggs. These hatch almost fully formed and are considered plankton. They will feed on small water critters and what remains of their egg yolk until they mature. They will then settle on the sea floor to live their lives.
Large egged octopuses lay eggs the size of a rice grain. When these hatch, they are fully formed octopuses, a miniature copy of their parents, the size of a sesame seed, ready to take on the world.

How Do Octopus Have Babies

The story goes as most do in the world of the animal kingdom. Two octopus of the opposite sex create life. Most stories don’t end in the self-inflicted death of both parents caused by a mysterious self-destruct characteristic imbedded in their very being, but I guess that’s just another reason to be both fascinated and confused by the daily lives of these cephalopods.

Are There Male And Female Octopus?

There are male and female octopus. Because of their short life span, octopuses grow quickly, reach adulthood quickly, and from there eventually feel the urge to mate.

How Do Octopus Mate?

Compared to the rest of the animal kingdom, in which you can find an array of wonderful mating rituals, the octopus seems to go about it rather nonchalantly. The male octopus has something called a hectocotylus, which is a modified arm about 1m long that holds rows of sperm. There are two ways mating can happen and that depends on the species of octopus.
In the first scenario the male will cling tightly to the top or the side of the female, like an aggressive cuddle. Or he may simply pop squat beside her. He then inserts his hectocotylus into the females mantle cavity.

In the second scenario, the male simply removes his hectocotylus and hands it to the female for later use. Yes, the male octopus has a detachable hectocotylus which the female can hold on to until she lays her eggs. She then retrieves the hectocotylus from her mantle and spreads the sperm over her egg babies to fertilize them. Female octopuses are pregnant for a few months, about 4 to 5, sometimes longer, until the circumstances are right. Temperature, location, all these things factor into when, where, and how the octopus lays her eggs.

Does An Octopus Give Birth To Live Babies?

An octopus does not give birth to live babies. Instead, she lays thousands of eggs, and then braids them all together into little bunches, then watches over them for months. Depending on the time of year and temperature, this can take up to a year. In this time, she is the ultimate momma bear: protective, caring, and determined. She stays with her eggs until they are ready to hatch as tiny fully formed octopuses ready for the big and scary underwater world.

How Many Babies Can An Octopus Have?

Because octopuses are semelparous, they only have babies once in their lifetime. And while octopuses can lay up to 200,000 eggs, they realistically lay between 56,000-78,000 eggs. That does not mean that all of them hatch. Additionally, once these babies do hatch and the female has done her one job, she dies, leaving them all alone. These babies are tiny, fragile, and up until this point have been completely relied on their mother. Now they are in open water, and while they can produce tiny squirts of ink when distressed, only a small amount of these babies actually survive, grow, and complete the cycle by contribute to the next generation of octopus before dying themselves.

How Big Is A Baby Octopus At Birth?

A video of octopus Eggs hatching

Where Do Octopus Lay Their Eggs

There is no specific place octopuses choose to lay their eggs. They often simply look for the safest space. This may be amongst seaweed, an underwater rock den, or any place that can give both eggs and mother some shelter.

How Long Does It Take For Octopus Babies To Hatch?

This once again largely depends on the species of octopus and the temperature of the water, but the eggs incubate for around 2-10 months.

How Many Octopus Eggs Survive?

There is so little information on the early life of octopuses, but it is estimated that only 1% of Giant Pacific Octopus babies survive and make it into adulthood. There is still so much to discover, understand, and learn about these fascinating creatures.

Do Octopus Die After Giving Birth?

Not quite. Female octopuses die after their eggs have hatched and are moving, breathing little octopus babies. At this point, the mother has been starving herself for the entirety of the egg incubation, provided them with fresh oxygenated water, and keeping them safe from predators and disease. Once the babies hatch, they are utterly and completely on their own as their mother has now wasted away. Male octopus usually die a few months after birth, for even more odd and uncertain reasons.

Why Do Male Octopus Die After Mating?

Male octopuses don’t have any baby caring duties, but still die a while after mating. There simply isn’t enough research to give a definitive answer, but this self-destruct trait might be because their one purpose in life is now complete, and probably natures way of keeping the ecosystem balanced.

Do Baby Octopus Eat Their Mother?

They do not. They feed on the casing of their egg and other tiny critters.

Can An Octopus Mate With A Squid?

Though they similar creatures, they are still different species, and there is currently nothing to evidence the possibility of Octopuses and Squids mating.

In conclusion the world of Octopuses is incredibly fascinating, confusing, complex, and wonderful. These crazy intelligent creatures seem to only have one purpose, and for the greater of the ecosystem, die once that purpose is fulfilled. However, the truth is there is not enough research yet available to fully understand them, but I for one cannot wait to find out more.