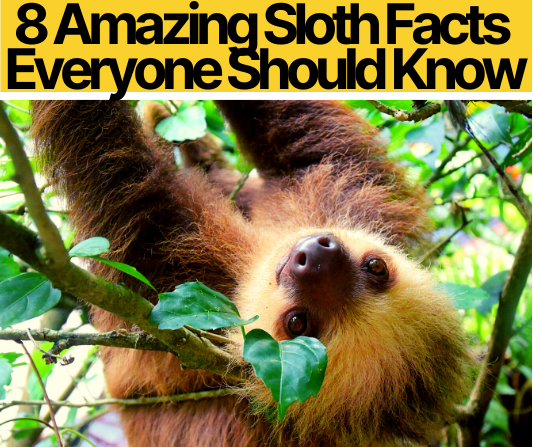 Did you know the reason why Sloths are so slow are because of their extremely slow metabolisms to Match?

In this Article we will Look at some of the Most Common Sloth Questions and Discover Some Really Cool Sloth Facts.

We Will also See how can sloths defend themselves being so slow & If Sloths Can Really Die when they Poop!

8 Amazing Sloth Facts Everyone Should know.

Let’s start with some of the most popular sloth questions & Facts.

How long can a sloth hold its breath?

Incredibly, it appears that a sloth can hold its breath for as long as 40 minutes. Why would a sloth ever want to hold its breath? Well, it turns out, sloths can swim. The same animals that usually move so painfully slowly in the tree-tops are able to move very fluidly in the water. Sloths, which already have a very low heart rate, are able to slow it to less than a third of the usual rate while in the water.

How long do sloths sleep?

It is commonly believed that sloths spend most of their lives sleeping. However, it turns out that this is a misconception based on sloths in unnatural environments, where they sleep between 15 and 20 hours per day. Sloths in captivity sleep significantly more than those in nature. They sleep much more conservatively in the wild. At home in nature, they usually get closer to 9 hours of sleep a day, which is not so different from humans.

We might think that such cute animals would always be docile and sweet toward humans. It is important to know that sloths in the wild, like any animal in nature, won’t hesitate to defend themselves if they feel threatened. It would not be safe to approach a sloth at home in the rainforest. The three-toed variety have a somewhat gentler nature than two-toed sloths. However, sloths are not as cuddly and helpless as they may appear.

How do sloths defend themselves?

Although they move slowly, sloths will fight back by biting and swiping with their massive claws at the end of their long arms. They also have extremely strong arms from climbing and hanging out of trees all day. Sloths can defend themselves to some extent when under attack, but they generally avoid trouble by staying high up in the canopy where predators cannot find them

What countries have sloths?

Sloths can be found in zoos around the world, from South Africa to the UK. It is unclear why Australian zoos have been so unsuccessful in keeping sloths, while others such as the Chester Zoo in the UK are able to feature sloths successfully. In any case, although sloths are tropical animals, they can be found in zoos in many parts of the world.

Do sloths come from Australia?

Sloths do not come from Australia. This is not an uncommon question, perhaps due to the high number of unique animals that are native to the Great Southern Land. There may also be confusion because of the shared classification of sloths and anteaters, as Australia’s native echidnas are sometimes called spiny anteaters. However, spiny anteaters are actually not even of the same order as the typical anteaters that we associate with sloths. They only share a name informally.

Not only are sloths not native to Australia, but they are not suited to life there, even in captivity. Sloths are tropical animals that need a climate to help them sustain their preferred body temperature of approximately 91 degrees Fahrenheit. Australian zoos, which are typically found in the cooler southern regions of the country, don’t providing the ideal conditions for sloths to thrive in. The last sloth to be kept in an Australian zoo died in 2017. The sloth, named Miss C, was kept at the Adelaide Zoo in South Australia. She was also the oldest of her kind on record, having lived to 43 years of age. Besides Miss C, Australian zoos have a poor record of keeping sloths alive and healthy.

Do sloths have predators?

Yes, sloths have natural predators that share their tropical habitat. These include harpy eagles, anacondas, jaguars. Sloths are also under threat from humans. One important reason for this is the loss of habitat from deforestation and humans encroaching on their land. Additionally, sloths are affected by poaching. They are sometimes killed for food or taken into captivity for sale on the black market as exotic pets. The pygmy three-toed sloth is now considered as critically endangered.

Do sloths die when they poop?

Yes, they often do die when they poop, sadly. This is more because they put themselves at risk of attack than due to the very real trauma of pooping itself, although that is a whole story on its own. Venturing down to the ground from the safety of the tree-tops puts the relatively defenseless sloth in range of attack from predators. Apparently more than half of sloth deaths can be put down to the dangers of this perilous journey. They only have to do this about once a week or less. Approximately a third of the sloth’s body weight is made up of the poop they expel on these dramatic occasions. The sloth will shuffle around to dig a hole at the base of the tree, poop all in one go, and then cover their waste before climbing the tree again.

Sloths are truly unlike almost any other animal. They capture hearts around the world for their cute faces and unusual habits. We hope you liked these sloth facts and that these remarkable creatures will be given the safety they need to regain numbers and stay with us for many years to come.