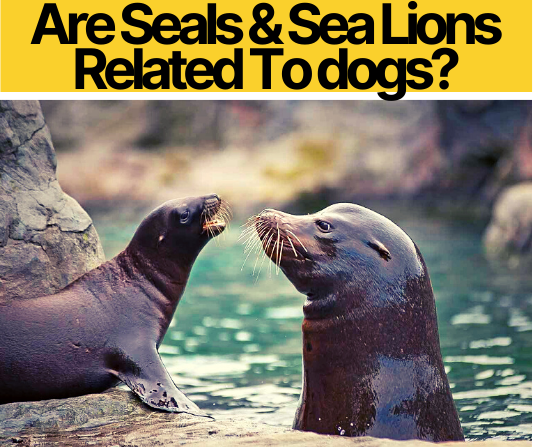 A lot of the time, people might refer to a seal as a water puppy.

But are they actually related to dogs even if they kinda look like some dogs?

In this article we will find out if Seals or Sea Lions are actually related to dogs,

Are Seals related to Dogs?

Seals and dogs are related, but they are not closely related, they come from two different families. They look alike because they both come from the same sub-order Caniformia, which means dog-like carnivores and they have similar traits such as a long snout. Sea lions are closely related to seals and they are also in the sub-order Caniformia. Recent studies have shown that both Seals and Sea Lions are as smart as dogs and may be smarter.

Are Sea Lions related to dogs?

I did my university research project on Sea Lions. After spending 70 hours observing them in a zoo, with countless talks explaining that sea lions and seals are different species, my friends just get them mixed up on purpose to annoy me. But they are very closely related. Some species of seal come from the same family as sea lions, Otriidae. The seals that come from different families are still closely related as they all come under a group called Pinnipeds, which encompasses all families of semi-aquatic mammals. Their closest living relatives outside of Pinnipeds are said to be from the family Mustelidae and Ursidae. Animals from the Mustelidae family include red pandas and skunks. From the Ursidae family seals are most closely related to bears.

So, if seals and dogs are not closely related, then why do they look alike? The answer is because they both come from a sub-group of animals called Caniformia, which means dog-like carnivores. Common traits for animals in this sub-order include non-retractable claws and long snout. Their long snout gives them a very distinct look which separates them from other carnivores. Caniformia includes a large amount of carnivores, the rest of the carnivores are grouped in the suborder Feliformia, which means cat-like carnivores. Some other animals included in the suborder Caniformia include bears, red pandas, raccoons and skunks. Hyenas used to be in this order but were recategorized as a member of Feliformia.

A lot of people may refer to seals as water puppies, they do act alike and share a lot of common traits. There have been lots of video recordings of seals acting playfully amongst their own species, much like dogs do. Sea lions also share a lot of personality traits with dogs, in captivity they are trainable and are very affectionate towards their owners. There are still major differences in their personalities however, with dogs being domesticated they do not face the same threats that seals and sea lions do in the wild. Seals and sea lions need to be prepared and can have a more aggressive side.

Seals look cuddly and utterly adorable and if you see one you are more likely than not, going to want to pet it. However, you should never try to play with a seal you come across in the wild.  Whilst they can be quite affectionate animals, they can also be quite vicious. If they see any of your actions as a threat they can attack. They have very sharp teeth and their bites can cause a lot of damage and infection. So, whilst they are often friendly, you should never try to approach or interact with one in the wild.

What are some dog breeds that look like seals

Dogs and seals share a lot of common traits, which can lead to incredibly cute comparison photos. But are there any specific dog breeds that look like most seals?

One common comparison is the Bichon Frise, a fluffy small dog. When they are being groomed they will often push their ears back and their fuzzy white fur can often create the illusion of a harp seal. The harp seal is a small, white fluffy, earless seal which is from the family Phocidae. The particularly wide eyes and long snout of a Shiba Inu also looks incredibly similar to pinnipeds. They have been compared to both seals and sea lions a great number of times.

Whilst there aren’t really any dog breeds that look strikingly similar to seals, there are a lot of comparisons with their similar features. A lot of dog breed look the way they do because of selective breeding, highlighting some of the more obvious traits they have like the large eyes and long snout. If you want to look on the internet you’ll find countless pictures comparing dogs and seals. I highly recommend you look for them, I did whilst writing this article and it was a great addition to my work.

Are seals as smart as dogs?

Dogs are commonly thought of as one of the smartest animals because of how we have domesticated them, but there are lots of intelligent animals seals being one of them. Seals have proven themselves to be as smart as, if not smarter than, their canine friends. During a study involved training, results showed that seals were actually quicker at picking up and learning hand signals than dogs. This work was carried out by cognitive psychologist, David Z. Hambrick.

Are sea lions as smart as dogs?

I’m sure a lot of you have been to a zoo and seen a sea lion show before. These shows prove that sea lions are trainable, similarly to dogs, but there has also been evidence to show they might actually be more intelligent than dogs. Sea lions have been known to follow human signals better than dogs and some have been able to learn more complex tasks than dogs can. It is also been observed that sea lions can follow musical rhythms and synchronise their movements to it. This has only previously been observed in humans and birds with vocal mimicry.

Can seals be domesticated?

If you have ever wanted to keep a seal as a pet, don’t worry, you’re not alone. However, domestication takes hundreds of years of selective breeding. They can not currently be domesticated but in captivity they can be trained.

Are seals dangerous to dogs, can they attack a dog?

Seals are very powerful animals and have been known to attack and, sadly, kill dogs. To keep your dog safe, always keep them on a lead if you are on a beach where seals may be present. If you see a seal make sure to keep you and your dog far away so it does not perceive either of you as a threat.

Is it okay to pet a seal?

You should never pet a seal, even if one approaches you just try to leave it alone. They can be vicious and have been known to attack people who try to pet them. As well as this, seals are under protection from the Marine Mammal Protection Act and it is against the law to touch or harass them.