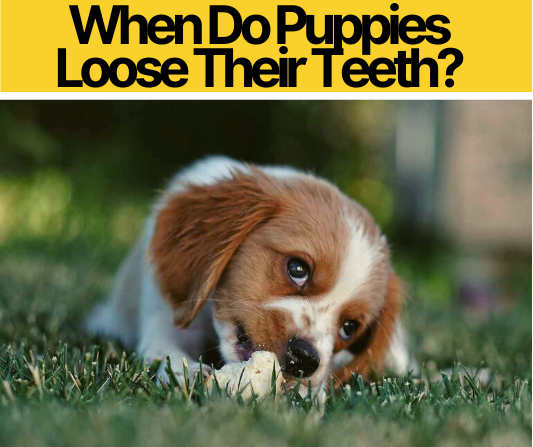 Puppies will lose not only lose their canine teeth but all of their puppy teeth. But when Exactly do they lose their Canines?

In this Article not only we will look at When Puppies lose their Canines but also at all the Puppy Teeth stages including the common symptoms you might notice and what to do about them.

When Do Puppies Lose their Canines?

Much like humans, when puppies are born, they don’t have any teeth at all.  When puppies are between three and four weeks old, they begin to get the first of their twenty-eight puppy teeth.  The first teeth that a puppy gets are their incisors, then their canines, and premolars.  These teeth come in when a puppy is between the ages of three and six weeks old.

Do Puppies Lose Their Molars?

Puppies do lose their molars.  A puppy’s baby molars are some of the last puppy teeth that they will lose.  Baby molars usually fall out when a puppy is around five to seven months old.  Like all of the other baby teeth a puppy has, when their molars fall out they will be replaced by their permanent adult teeth.

How Many Teeth Do Puppies Lose?

Puppies will lose a total of twenty-eight puppy teeth.  There are twelve incisors, four canines, and twelve premolars.  The incisors are located right in the front of the mouth, with six on top and six on the bottom.  The canines will be located on either side of the top and bottom of the mouth, right next to the incisors.  The four canines frame the top and bottom incisors in a way.  Finally, the molars, which are called premolars in puppies, come in behind the canines.  There will be three premolars behind each canine, making a total of twelve premolars.  All of these twenty-eight teeth will fall out as their roots dissolve to make room for their permanent teeth.

How Long Do Puppy Teeth Last

Puppy teeth last around six to seven months.  The amount of time that a puppy keeps their baby teeth is greatly impacted by the breed of dog and their size.  Almost every puppy is born without teeth.  Between four weeks and eight weeks of age is when a puppy’s teeth will come in.  Puppy teeth fall out in stages, with the first of those teeth starting to fall out when a puppy is anywhere between twelve and sixteen weeks old.  The last of those puppy teeth will generally fall out when a puppy is around five to seven months old.

First, puppies’ incisors come in first.  They will get six incisors on the top and another six on the bottom.  Puppies will keep those incisors until they are between twelve and sixteen weeks old.  Around the twelve to sixteen-week mark, the baby incisor roots will dissolve, and those teeth fall out.  They are then replaced by the permanent incisor teeth that they will have for the rest of their lives.

Next, four canine teeth will come in.    Those baby canines will last until a puppy is sixteen to twenty-four weeks old.  Like their incisors, the roots will also dissolve so that the baby teeth can fall out and be replaced by their permanent teeth.

Finally, puppies will get twelve premolars that will come in right behind their canine teeth.  Premolars last until a puppy is around five to seven months old.  The roots of premolars are thicker than those of the incisor and canine teeth, they also come in as the last of the puppy teeth.  For that reason, they are the last of the puppy teeth to fall out.  Once these premolars fall out, they will also be replaced by permanent teeth.

Puppies, like children, can be uncomfortable or even experience pain when losing puppy teeth and having their adult teeth come in.  As a result, puppies may drool a lot, they may also chew a lot to help relieve their discomfort and help their permanent teeth to break through the surface.  Puppies have also commonly been seen pawing at their mouth when they are in a great deal of discomfort.

Are Puppies in Pain When They are Losing Their Canines?

What Happens When Puppy Teeth Fall Out?

When Do Puppies Get Their Second Teeth?

When puppies are three to six months old their twenty-eight puppy teeth begin to fall out and those teeth are replaced by forty-two permanent teeth.  By the time a puppy is about seven months old all of their baby teeth should have fallen out and will have been replaced by permanent teeth.  In addition to replacing the twenty-eight baby teeth that were there, an additional fourteen teeth will come in to give your dog a full set of strong adult teeth.

Puppy teeth are sharper than permanent canine teeth.  There are several hypotheses on why puppy teeth are actually sharper than permanent canine teeth.  Some of those reasons are based on the fact that by nature dogs are carnivores and therefore when they stop nursing their first solid foods commonly are meat.  Granted, we have many domesticated dogs now, that doesn’t change their genetic nature.