When someone mentions reptiles, most people will instinctively think about snakes, without considering that turtles are reptiles too. Keeping reptiles as pets has recently become a lot more popular, and snakes and turtles are two of the most commonly kept reptiles. This can bring up a lot of questions for someone interested in reptiles, particularly beginners, when looking at them both in the wild and in captivity.

Do snakes feed on turtles? What types of snakes might eat turtles? Also, can turtles and snakes live together? It’s understandable to be worried about these questions, or simply curious, so I looked into them for you.  After doing some research, I’ve come up with a series of answers that may help with some of your common questions.

Although Rare, Yes Some Snakes Can eat smaller species of turtles or turtle babies, they are also known to feast on turtle eggs which are easy to get in wild. A large snake such as Common Kingsnake can easily eat a turtle, for other snakes it would be too difficult due to the fact that they couldn’t swallow a whole turtle or even digest its shell.

Can a snake even kill and eat a turtle?

Before looking at what snakes may eat turtles as part of their diet, it is probably worth looking at if they are even able to kill and eat turtles. There are several species of snake, usually the larger ones, which have evolved to eat fellow reptiles, but the turtle does not really come under this category. A snake risks greatly injuring itself if trying to consume a turtle, the shell is very difficult for the snake to digest and can severely damages the snake’s insides due to its sharp edges.

A snake’s diet is partially based on size and turtles are often far too wide for a snake to consume. As well as this, snakes often kill prey by constriction and since turtles can retreat into their shells at signs of danger, it is more difficult for a snake to kill a turtle than it is for it to kill other prey. However, with this being said, there are still some species of snake that will feed on smaller species of turtles.

The Common Kingsnake has a very varied diet, due to its larger size and vast abundance across America, it can consume a large number of prey. Measuring at an average of 30 to 60 inches in length, the Common Kingsnake can and does eat smaller species of turtles. Reptile eggs, including turtle’s eggs, also make up a large part of its diet.

The Black Snake, also known as the Black Rat Snake, does not consume turtles as part of its diet. As the name suggests, the Black Rat Snake has a diet that largely consists of rodents, particularly rats. There have also been instances of them eating frogs and small lizards, but they seem to stay away from hunting turtles.

Whilst Corn snakes do grow to be quite lengthy critters, reaching 5ft in adulthood, they do not consume turtles. They are a really narrow species of snake and even small turtle breeds would be too wide for it to eat. As someone who had a pet corn snake as a child, it makes an almost comical image trying to imagine a tiny corn snake attempting to wrap its mouth around a turtle.

Water snakes prefer to remain and hunt by the water, which makes sense. They eat small fish and amphibians, such as cricket frogs, but they don’t eat turtles. In fact, certain species of turtles, such as the Snapping Turtle, would pose a larger threat to the Water Snake than the Water snake would to a turtle.

The word python often makes you think of a giant powerful snake, but the Ball Python is only about the same length as the Corn Snake. Ball Python’s eat rodents and occasionally in the wild will eat birds, but they don’t eat turtles.

Garter Snakes have a very large diet range. They aren’t particularly picky and will eat anything from fish, to rodents, to amphibians, but they are not designed to consume other reptiles and therefore don’t eat turtles.

We’ve covered whether snakes eat fully grown turtles, but what about turtle eggs and baby turtles? Turtle eggs are actually a very nutritional snack that snakes will hunt for in the wild. Since turtles will usually leave their egg nests alone after laying them, they make for a relatively safe hunt for snakes. Not all snakes will specifically search for turtle eggs though, it is usually the larger ones, because turtle eggs are buried in the sand and not all snakes are excellent burrowers.

What about baby turtles

Baby turtles have a much softer shell than adults, one that would cause less damage to a snake trying to eat it. Snakes can eat baby turtles, but they don’t tend to, it is usually the snakes that already eat turtles as a part of their main diet, such as the Common Kingsnake.

Box turtles are one of the smallest turtle species, only measuring about six inches. And yes, they do look kind of like a box, they have an oblong shaped shell and will often retreat their legs and head into this shell, making it look like a small box. With Box turtles being so small, it’s not surprising to hear that snakes are known predators of the Box turtle, particularly baby Box turtles. What is more surprising is the fact that box turtles have been known to eat snakes. Box turtles are a largely carnivorous turtle and in the wild it is known to have a ‘catch anything you can’ kind of attitude, which yes does include snakes. Basically, Box turtles and snakes do not make for very compatible pets.

If you have a pet turtle, knowing that some snakes prey on them, you might be wondering if it will attract snakes to your house. You don’t need to worry though; captive turtles would not be able to attract a wild snake to your house. However, if you feed your turtle in an outside space and leave some prey out, this may attract a snake, so be careful. A turtle would only attract a snake if it were doing so purposefully, in an attempt to hunt and feed on it. 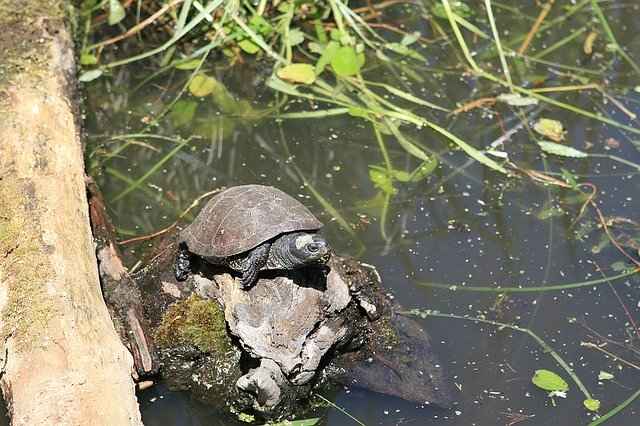 Can turtles and snakes live together

So, after learning that there are types of snakes that don’t prey on turtles, you might be wondering if you can keep them together as pets. The short answer to this question, is no. The set up for a turtle enclosure and a snake vivarium are very different, and you couldn’t keep the two species together without keeping one, or both, in low welfare conditions. Depending on the species of snake and turtle, they require different temperatures, levels of humidity and diet. As well as this, it is very possible that the two will hurt each other. For example, the turtle may easily mistake the snake’s tail tip for food.

What are some similarities between Snakes and Turtles? The most obvious similarity between the two is that they are both reptiles. They also have overlapping diets, certain types of snakes and turtles both eat small fish and amphibians. Both snakes and turtles lay eggs, which is a reptilian trait.

Can turtles and frogs live together? No, many species of turtles feed on frogs as a main part of their diet. Frogs are also usually solitary and don’t do well being housed with other species.

Can multiple snakes live together? Snakes are solitary animals and should not be kept together, even with other snakes of the same species. Living together can cause snakes a great amount of stress.

In conclusion, we’ve learnt that most species of snakes do not feed on turtles as it can seriously injure them. But there are some species of snakes that are designed to eat turtles such as the common Kingsnake. Turtle eggs are a good food source for snakes and turtles themselves can eat snakes. They are not species that you would be able to keep together as pets, despite their similarities. They are weird and wonderful in their own way and should be kept as such.