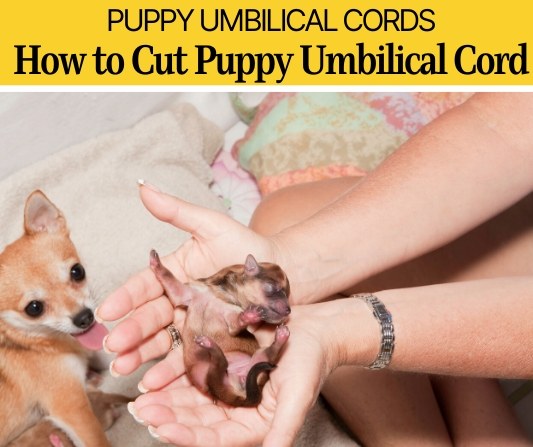 Puppies are all born with umbilical cords.  Most often each puppy comes with its own placenta and is in its own bag of waters.

Each puppy umbilical cord attached to its individual placenta and provides its own individual nutrients to that puppy.

In this article we will see How you should cut umbilical cords of newborn puppies and what are some of the things you should be aware of.

How to Cut Puppy Umbilical Cords

In the event that the mother dog does not chew through the puppy’s umbilical cord, for the health and safety of the puppy, it will need to be cut and tied off.  To properly do this you will need a short list of supplies to do this correctly.  Those supplies are:

Before beginning, you should wash your hands thoroughly and you may even choose to wear rubber gloves.

This process ensures that you are far enough away from the puppy’s body not to harm them.  Tying off the umbilical cord will ensure that there is no unnecessary bleeding and sanitizing the end will protect it from infection.

Should I Cut the Umbilical Cord of a Puppy?

Dogs generally give birth to multiple puppies.  The placenta provides substantial nutrition and energy to the mother dog so that her body is nourished and has the energy to deliver each of the puppies that she is carrying.

In the event that the mother does not chew the umbilical cord, many veterinarians do recommend that the cord be cut using a very specific procedure at home, or by bringing the mother and puppies into your local vet’s office urgently.  Failure to have the umbilical cord severed either naturally or by intervention in a timely manner can result in an infection or even the death of a puppy.

Do Puppies Feel Pain What the Umbilical Cord Is Cut?

How to Tie Off A Puppies Umbilical Cord

To tie off a puppy’s umbilical cord properly you should choose a heavy-duty thread, dental floss, fishing line, or other similar thin but strong cord to tie off the umbilical cord.  While one tie is sufficient when placed between the puppy and the chosen cut site, some professionals recommend that you use two ties and cut in between them, much like what is done when a human gives birth.  This is especially true if the mother dog has not delivered the puppies placenta yet.

Though you can wait as much as fifteen minutes for the mother to complete the delivery of a puppy and its placenta before you need to consider cutting the cord yourself.

That is not always the case though.  Sometimes, for a variety of reasons, the mother dog may not chew the umbilical cord and separate the puppy from the placenta.  In the event that this happens its important that you properly cut it to avoid harm or excessive bleeding to the puppy.

It is important to properly tie-off a puppy’s umbilical cord before you cut it because if done improperly you can cause blood loss or even death from doing it incorrectly.  When done correctly, on the other hand, there should be little to no bleeding just like when the mother dog does it.

How Do You Stop A Puppy’s Umbilical Cord from Bleeding?

You must properly tie off the end of a puppy’s umbilical cord to ensure that it stops bleeding and does not develop a rebleed.  Depending on the circumstances you may need to clamp off the cord, fold the end over and pinch it off, or even burn the end.

What Happens If You Do Not Cut the Umbilical Cord?

How Long Can the Umbilical Cord Stay Attached to the Puppy?

A puppy may keep its umbilical cord typically for a day to a week.  More specifically the tissue of the umbilical cord, detached from its nutrients source of the placenta and no longer of use, will dry up, decay, and fall off.  Every puppy is different, but most often this happens within one to ten days at most.  Generally, the puppy pushing itself around on the floor will help with the falling off process.

When Does A Puppy’s Umbilical Cord Fall Off?

As the umbilical cord tissue dies, the cord dies.  This usually starts near the point at which it was cut and works its way towards the puppy’s body.  As it reached the body of the puppy, the opening where nutrition and blood when into the puppy heals closed because it is no longer needed.  When the opening at the body is mostly or completely closed the cord will finish falling off of the puppy.  The dragging motion puppies use to get around on their bellies in the first weeks of life may cause the cord to fall off prematurely.  This may result in light bleeding or even a sticky spot where the cord was that has body fluid on it.  If this occurs, keep an eye on the site, keep it clean, and ensure that it does not become infected.

Puppy Umbilical Cord Ripped Off – Cause for Concern?

An umbilical cord being ripped off may be a cause for concern.  The most concerning things that you need to worry about are if the site bleeds a lot or if an infection occurs.  If the umbilical cord is ripped off for any reason it is important to monitor it for bleeding, if it does bleed and its more than light spotting it is time to take the puppy to the vet.  A trained veterinarian may need to stich the site of the umbilical cord in order to stop the bleeding.

If there is little to no bleeding, you really only need to keep an eye out for infection.  If the umbilical cord site develops a yellow or greenish discharge, begins to smell, or becomes warm to the touch (warmer than surrounding tissue) its also time to have the puppy examined by a medical professional.

To help ensure that an infection does not occur, clean the area thoroughly, pat the area dry, and keep a close eye on the site of the umbilical cord until it has healed from the cord being torn off.

Can You Pull the Placenta Out of a Dog?

You should not pull the placenta out of a dog unless it is absolutely necessary.  If the dog is having trouble delivering the placenta, you can gently pull on the umbilical cord and help her to deliver it.  However, you should ONLY pull on the umbilical cord to assist in the placentas delivery when the mother dog is actively having a contraction.  Doing otherwise can cause the mother dog to bleed internally and die before you even have time to seek emergency medical help.

Does Each Puppy Have Its Own Placenta?

Yes, each puppy has its own placenta.  The only time this is not the case is when a dog has twin puppies that are encased in the same bag of waters.  This is an incredibly rare occurrence in dogs.  In the event that something like this occurs the mother dog often cannot deliver these puppies naturally and veterinary intervention is required.