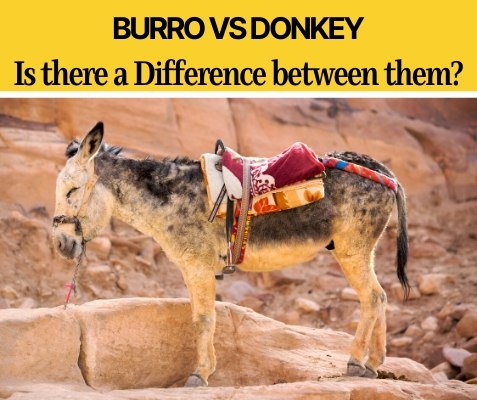 While visiting a local non-profit farm the other day I heard two men arguing near the donkey pen. As I got closer, I realized that these gentlemen were debating whether the animal was a donkey or a burro.

Personally, I did not know what the difference was or if there even was one. I decided to do some research and find out what, if any, is the difference between a donkey and a burro.

In This Article we will see what are the Differences Between A Donkey and a Burro.

So, is there a difference between a Donkey and a burro?

Technically, the answer is no. “Burro” is just a Spanish word for “donkey.” There are a few places in the U.S. where small donkeys are referred to as burros, but for the most part the two words mean the same thing.

Is a Burro a Donkey?

Yes, a burro is a donkey. “Burro” is just a Spanish word for donkey, although sometimes people in the U.S. use the word “burro” to describe a small donkey. Nevertheless, a burro is still a donkey. Burros (or donkeys) are four legged farm animals that almost look like a mix between a cow and a horse. Their coats range in color from white to grey to black, and they have a black stripe that runs down their back from mane to tail. Their most well known features are their large ears, cow-like tails, and of course the signature “Hee-Haw” sound they make.

Do Burros Have Different Shape/Length Tails than Donkeys?

No. Burros ARE donkeys, so there is no difference between the physical appearance of a burro and a donkey. Mules are a different story. A mule is basically a donkey hybrid; you get a mule by breeding a male donkey with a female horse. Because of this, mules are much larger than donkeys/burros. They also have smaller ears and longer, more horse-like tails.

What is the Difference Between a Miniature Donkey and a Burro?

What is the Difference Between a Donkey and a Mule?

There is a HUGE difference between a donkey and a mule. As I mentioned earlier, a mule is a basically a hybrid donkey. When a male donkey and a female horse have a baby, that baby is called a mule. Mules are typically much larger than donkeys. On average they weigh between 800 and 1,000 pounds and stand 50 or more inches tall from hoof to shoulder. A less common relative of donkeys and mules are hinnys.

When a female donkey and a male horse have a baby, that baby is called a hinny. Because the donkey mother is usually much smaller than the horse father, hinnys are smaller than mules on average. Hinnys usually stand less than 50 inches tall and weigh the same as the average donkey (400 to 500 lbs.). Both hinnys and mules get big ears from their donkey parent and delicate bodies from their horse parent. However, hinnys have smaller bodies smaller ears, and their tails are less full than mules. The table below shows a comparison between the four main types of donkeys and donkey hybrids; who their parents are, how tall they are on average from hoof to shoulder, and their average weight.

What are burros good for?

Burros (or donkeys) are good for so many things! Donkeys are gentle, strong, and intelligent animals. Where I live, most donkeys are kept as pets because they make great companions for other animals and they protect their family. Horses, donkeys, and cattle are great examples of herd animals, which means they rely heavily on their family and do not do well living on their own. Because donkeys are much hardier than horses, they are significantly less expensive to care for, making them great companions for families who cannot afford to care for two horses.

Donkeys also protect smaller animals from predators like wild boars, coyotes, and bobcats. Many farmers in my area who have goats and baby cattle end up adopting a donkey to provide extra protection for the little ones. In some places donkeys are still used for pulling carts and plows for farm work. These creatures also make great additions to petting zoos and “pony” rides because of their gentle nature and natural instinct to protect the young.

Can a burro reproduce?

Yes! A burro/donkey can reproduce. They can reproduce with both other donkeys and horses depending on the size of the mother and father. A large male horse cannot successfully reproduce with a small female donkey/burro. The baby would be too large and both the offspring and mother would likely not survive the birth. Two donkeys and female horses with male donkeys have much better chances for reproducing.

What two animals make a burro?

Like I mentioned in the chart, a burro/donkey is the offspring of a male donkey and a female donkey. Two donkey/burro parents make a donkey/burro baby.