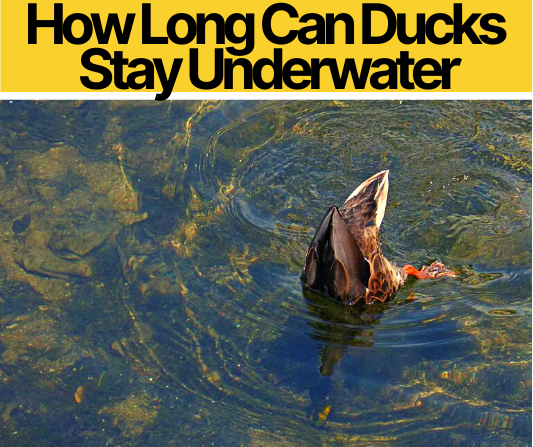 Did you know that some ducks are specifically designed to be master underwater divers?

Their unique features and bodily functions set them apart from other waterfowl and allow them to dive and feed far beneath the waters surface.

But How Long can Ducks stay Underwater to hunt for food? In this article we will see just that and also find out if Ducks can breathe underwater.

How Long Can Ducks Stay Underwater?

Now, keeping in mind not all ducks are built to withstand the same conditions, on average a diver duck can stay underwater for up to a minute.

Ducks can be split into two categories: Divers and Dabblers. The ducks that stick to shallow water and rely on tipping their heads under water for food are Dabblers.

They are a lot lighter than Divers and are more buoyant, which allows them to easily tip upside down with their feet in the air for snack time. Dabblers also don’t solely rely on bodies of water to provide food, they are more than capable of foraging on land. Divers are heavier, their bodies more compact, and are capable of feeding as deep as 65 feet.

How Long Can Ducks Hold Their Breath?

A typical dive can take anywhere from 10 – 30 seconds, but Divers are capable of holding their breath for up to a minute. This allows for time to descent, forage and feed, and then return to the surface for air.

Why Can Ducks Stay Underwater For So Long?

All ducks have webbed feet and waterproof feathers. Their feet act as paddles to push farther and have no nerve-endings. This means they can easily tolerate colder water. Their super feathers come from something called a preen gland which can be found near their tail. This gland produces oil, which they then distribute over their feathers with their bills, creating a slick and waterproof coating.

Diver ducks are specifically given additional traits and functions to help them survive underwater for longer than their Dabbler kin.

Their bodies are wider in the middle and their wings are more compact, which means they can be compressed tighter against their bodies, allowing for greater diving efficiency. Their webbed feet are also larger, giving them an extra push underwater.

Divers are heavier than Dabblers. Right before they dive, they press their wings close to their bodies, expelling any air to reduce buoyancy. With one powerful kick they arch up and quickly disappear below the water surface.

Using their paddle-like feet and slick wings, they slice through the, water pushing down, using their head and tail to navigate. Once they have reached the bottom, their feet act like hoverboards, keeping them steady enough to forage for aquatic vegetation and insects.

While underwater, diving ducks actually reduce their oxygen intake, their heart rate reduces, and oxygen is released sparingly. This reflex happens the moment water touches special receptors that reside in their nostrils. Their whole body essentially shifts to efficiency mode, the same way you might switch your laptop or phone to power saver mode.

When Divers are done underwater, they simple relax all their muscles and float back to the top. Fun fact, they almost always resurface in the same place they dove from.

Ducks do not breathe underwater, they simply are capable of holding large amounts of air within them, and then distributing that oxygen efficiently and slowly, allowing them to be under the water for as long as 1 minute.

Can A Duck Drown?

You’d think with all their constant dipping underwater and this super reflex ducks possess; they are incapable of drowning. But unfortunately, it does happen.
Baby ducks for example, haven’t developed their preen gland, so they receive the protective super oil from their mother. They can’t waterproof themselves. Also, little ducklings can get tired of paddling in the water, and if they’re too far from shallow water, they can drown.

On a more morbid tone, a lot of female ducks drown during mating. Some male ducks push the females head underwater before mounting them. And while they are more than equipped to hold their breath underwater, but some males take turns mounting females continuously. This means that the females head is constantly being pushed underwater repeatedly. This, unfortunately, sometimes leads to drowning.

Can Ducks Swim Underwater?Ducks often seem like blow up animals for your pool. They are lighter than water, so even when they tip over, their feet and tails remain in the air, holding them above the surface. But when they do decide to submerge, all those abilities shift to adapt to underwater conditions. Diver ducks are built to swim underwater. Think of their feet as paddleboards. Their slick waterproof bodies are the equivalent of Olympic swimmers shaving to avoid friction in the water. They navigate through the water with their tails and by moving their heads side to side.

How Deep Can A Duck Dive?

This number varies significantly depending on the breed and species of the duck. Sea ducks are among the most skilled divers and are capable of descending up to 65 feet! Long-tailed ducks are capable of diving even deeper. In coastal areas, Divers brave an average of 40 feet.

These numbers vary on where the breed resides, and how deep the water of their surroundings usually is. This also depends on whether they belong to the Dabbler or Diver category. Dabblers rarely dive, and feed by simply dipping their heads underwater and use their bills to kick up dirt and aquatic vegetation, and rarely full on deep sea dive to forage way below the water’s surface.

How Long Can A Bufflehead Duck Stay Underwater

Buffleheads are the perfect little hybrids. They breed near ponds and forage in mostly open shallow water but are the smallest Divers in North America, diving for crustaceans and other delicious aquatic invertebrates, swallowing their food while still underwater. On average they dive for roughly 12 seconds, but they are capable of staying underwater for about 25 seconds.

How Long Can A Diver Duck Stay Underwater

Diver ducks can spend up to a minute underwater and are used to deep and open water. They spend most of their time on the water or in the air. They can even take flight from the water. On land, they can seem awkward and clumsy. Females will usually only take to land to breed and take care of their little ones until they are ready to brave the big and watery world.

How Long Can A Mallard Duck Stay Underwater

Mallards are not Divers, so they do not descent underwater. Instead they remain buoyant and tip their upper bodies under the water surface to look for seeds and vegetation. They are mostly found in wetlands such as marches, ponds, and lakes. The also forage on land as much as they do in shallow water. This means when they do pop underwater for a little look, it is only for a few seconds at a time.

How Long Can A Wood Duck Stay Underwater

Wood Ducks are Dabblers, and feed through short or shallow dives that don’t require them to completely submerge under water. They are found mostly in swamps and freshwater marches and benefit from open water that can provide areas of thick vegetative cover to hide and forage in. As they are Dabblers, they are unable to stay underwater for long. Their dips below the surface only lasting a few seconds.

Why do ducks put their head underwater?

Ducks poke their heads underwater to forage for food. They use their bills to dig around the dirt, kicking up seeds, insects, crustaceans, roots and other foods.

Which ducks dive for fish?

This depends on their habitat as ducks are omnivores. This means they eat both plants and animals. Their diets consist of whatever they can find, including small fish, clams, roots, and other vegetation. The Merganser duck is known for mainly feeding on fish.

It seems the world of ducks is a lot more complicated than it seems. Not only can some ducks dive better than humans, but some are specifically designed by nature to excel at this through reflex. It isn’t something they have to learn or think about, their bodies have an autopilot function to breeze through deep water as soon as their nostrils touch it. That is quite phenomenal.