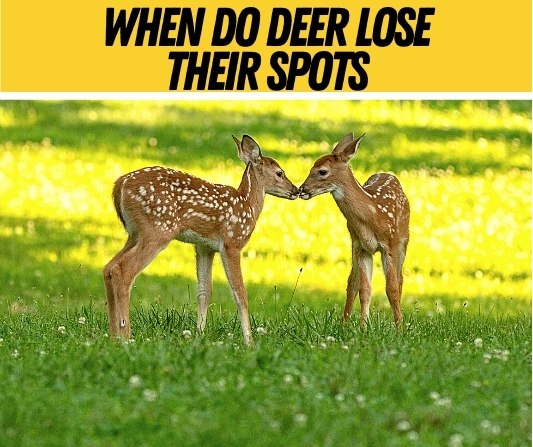 If you’ve ever paid attention (or watched Bambi!) you may have noticed that fawns, how baby deer are called for the first year of their life,are born with two rows of white spots from their neck to the tail.

This printed phenomenon vanishes as deer acquire maturity and strength to survive on their own, and it is a pretty interesting process to learn about.

But When Do they Lose them since most Adult Deer do not have them?

When Do Deer Lose Their Spots?

Fawns need their spots to survive, but as they gain strength, independence, and maturity they will lose their spots completely, which will be after the first 120 days or so.

How Old Are Baby Deer When They Lose Their Spots?

As adorable as that white pattern may look, by early fall, around October, fawns will be six months already and have gone through their first fur shed, losing all the spots to grow new and thicker coats of hair.

If you observed a hair from the fur of a fawn, you would realize that only the tip is white-colored, but the root is actually brownish-red, like the rest of their body. Since the colored part covers merely the topcoat, as deer shed their shiny babyfur, the spots disappear.

By this time, six-month-old fawns will have also grown ten times their size and weight, gained enough fat and strength to survive.

Why Do Baby Deer Fawns Have White Spots?

Fawns are born quite fragile, somewhat between six and eight pounds, scentless, with wobbly legs – yes, just like in the movies- and fully coated in their brown coat with white spots.

During the first weeks (even months), a fawn is quite an attractive and vulnerable prey for predators, which is why they have some features that help them survive longer and hide in plain sight. Their white spots serve them as camouflage.

Fawns spend their first months lying underneath trees and searching for new hiding spots, and since a deer’s natural habit is the forest, their brown coat and spots are supposed to help them blend completely into their environment. While the obvious brown coat camouflages on the soil and leaves of the ground, you might be wondering what the white spots have to do with it; you see, as sunlight comes through the trees, it creates bright speckles of light on the floor, and that is why the white spots help them recreate a realistic blend with the background.

Another camouflage feature is that fawns scent glands do not develop fully until a few weeks later, which makes them difficult to smell. Also, a doe will lick their fawns, and eat their urine and feces to make their scentless noticeable and keep predators from detecting them.

Do All Baby Deer Have White Spots?

Most of them do! Deer belong to the Cervidae family, which includes almost 43 species divided into two groups: the Cervinae and the Capreolinae. The first group includes species such as Elk, Chital, Red Deer, Sika Deer, and Fallow deer; and the second group includes the White-tailed deer, Mule Deer, Moose, and Reindeer.

Most deer fawns are born with white spots for survival purposes; except for a couple of species such as baby reindeer and moose, which are called calves instead of fawns because of their larger size. These creatures are born in varied colors and weigh around 6 and 16 kg, depending on the species.

When Do Whitetail Fawns Lose Their Spots?

Whitetail deer might be one of the most popular and known deer species. The Odocoileus virginianus is native to America and has been introduced in some cities around Europe. The main characteristic about these deer is the white hair beneath their tail, along with their brown to red coat and their beautiful antlers, which both male and female have.

Whitetail fawns are born somewhere between May and July in the woods, which can be a pretty dangerous place for a newborn creature with wobbly legs that can barely walk short distances, especially as their mother leaves them alone to find food. Since they spend so much time hiding from predators, like coyotes, nature gave them a lowering heart rate and white spots as a camouflage system since birth, which they will keep until they turn four to five months old. Around September to late October, fawns will shed their brown-red coat along with their white spots, to grow a thicker and greyer layer to get them ready to survive winter.

By this stage, fawns are strong enough to outrun predators on their own and will start following the doe around for large distances.

When Do Black-tail Fawns Lose Their Spots?

There are two black-tail deer species: The Colombian black-tailed deer and the Sitka black-tailed deer, both considered being a smaller subspecies of the mule deer. While the Colombian deer can be found from North America to Canada, the Sitka deer are mostly common in Alaska. The main characteristic of these fury friends is their brown and black tails with a whitened bottom side, and a darker brown coat. Also, males have antlers, but females do not.

Colombian black-tails are born in spring, between May and June, in forest and woodlands areas; just like the whitetails, they are born with white spots that will help them hide better. Before winter, they will also shed their fur coats for darker ones, making their white spots disappear.

The Sitka black-tailed deer are born around June in their natural rainforest habitat. They will also shed their white spots and fur coats as fall begins, but their winter coat will be grey-brown and leave two white neck patches.

As a fun fact, both male deer species will start growing their antlers a couple of months after their first coat shed, around six to eight months old.

When Do Mule Deer Fawns Lose Their Spots?

Mule deer are famous for their large ears that resemble those of a mule and the black tip on their tail, usually found in the Rocky Mountains and forests around southwest America.

People often describe this particular deer as a hybrid of the whitetail and the black-tail deer, which means their behavioral patterns, are also quite similar. Mule fawns are born between April and June, weighing around 6 pounds, with light brown coats and white spots on their back, which they will lose four months later.

When Do Deer Get Spots?

Most deer species are born with them. Somewhat between late spring and early summer and after ten months of gestation, deer come into this life with a cute little face and a reddish-brown body covered in two sets of white speckles, being over 300 spots in total spread all over the top coat of their fur, varying in size and form.

Which Adult Deer Has Spots?

As fawns, most deer species have white spots that serve as camouflage to prevent predators from attacking them, but the speckles will disappear after their first coat shed. However, three deer species keep their white spots even throughout adulthood: The Fallow, Chital, and Sika deer.

Both, the fallow and Sika deer are light-colored, but their coat color can vary in darker and lighter colors according to the season and region. These deer keep their white blotches past childhood, but they are not always visible. Since their coat color varies, spots are most visible during summer, but can sometimes get lost on their winter coat. Those fallow deer that have darker or lighter coat variations rarely show these splotches. The chital or axis deer are smaller creatures, with caramel brown coats and very visible white spots, rather than just splotches like the other two species. They also have a distinctive white stain on their neck.

Can Adult Whitetail Deer Have Spots?

Since whitetail deer shed their coats twice a year and the white spots are only located at the top of their hair when they are born, it would be very odd to find an adult whitetail with white spots.

Besides that, adult or mature whitetail deer do not spend all day lying on the ground as fawns do, so their reddish-brown coats without white spots actually serve as a better camouflage in their active environment. Mature whitetails also develop their better senses, speed, and agility to escape danger with ease.

How Long Do Deer Stay With Their Mother?

For the first year of their lives, male fawns will stay with their mothers and leave around the next winter to start exploring on their own. On the other side, females will stay close to their moms for another year, if not their entire life within the same herd.